Get fresh music recommendations delivered to your inbox every Friday.
We've updated our Terms of Use. You can review the changes here.

"How Do We Prevent the Advance of the Desert ? " CD 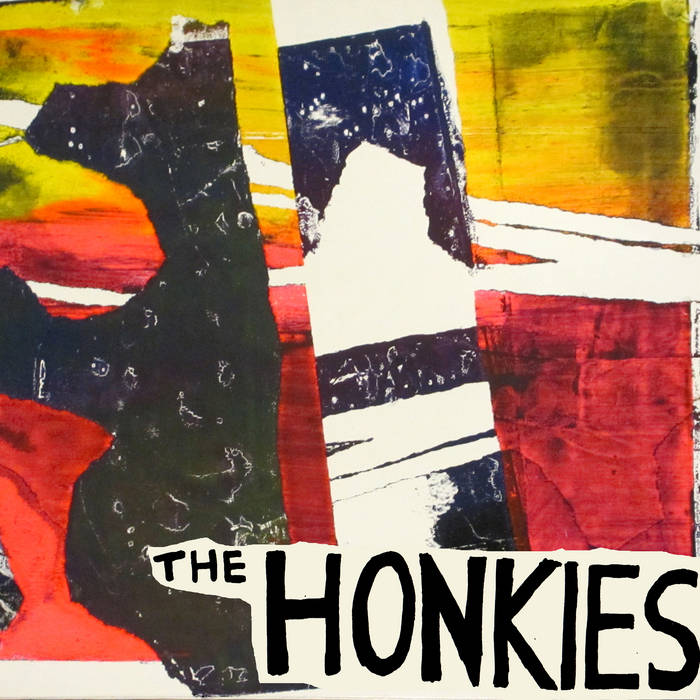 The Honkies were active between 1987 and 1993 touring the UK and Europe with their honking brass, wonky beats, and homemade costumes. This line up was the core of the band and was later joined in 1990 by John Edwards on Double Bass.
"How Do We Prevent the Advance of the Desert" was their Second Album and was released in 1989 on a home pressing limited run of vinyl all with screen printed sleeves. Each front cover was different. The back cover with information was screened the same on each.
This is the first time that record has been available on CD or digitally. The CD cover is a copy of just one of the vinyl sleeves.

VITAL WEEKLY 1086 :
The name of trumpet player Andy Diagram pops up every now and then in Vital Weekly, mostly as
a member of Spaceheads, a duo he has with drummer Richard Harrison, going back to Vital Weekly
137 and as recently as issue 1070, but also for instance as a collaborator with Phillipe Petit. His
musical career started in the late 70s with bands as Dislocation Dance and The Diagram Brothers,
he also played with Pere Ubu, David Thomas and James. I never knew of a band he was in called The
Honkies, where he plays trumpet and sings, along with Caroline Kraabel on saxophone and vocals,
RE Harrison on drums, washing machine, trombone and vocals and Kathy Hulme on saxophone,
cello and vocals. The little press note says that 'How Do We Prevent The Advance Of The Desert'
was their first record, but Discogs lists it as their debut, and it was released in 1989 in a handmade
cover, so the re-issue has just one of the vinyl sleeves reprinted. Music 'A La Coque is an Italian
imprint who search the vaults for crazy obscure free music, and as such as The Honkies are a great
find. This is a wild ride indeed, very much in the spirit of post-punk and without a single guitar in
sight. It bursts with heavy rhythms, wild drumming on that kit, but at the same time heavy on the
use of wind instruments. These blear around in the best free jazz manner, but it's perhaps the use
of all these vocals, which add that post-punk flavour to it. This has all to do with the freedom of
music and very little with the correct use of playing music; it is about the creation, stupid. Very
much in spirit of what punk could have been, had it not been spoiled by drugs, drinks and fight.
This is some forty-one minute of energy unleashed upon the listener, furious, even if it goes down
in tempo a bit. The Honkies leave very little room for contemplation, allowing no Zen like hearing
here. This was never before on CD, and now that void has finally been filled. Served as an introduction,
like for me, or for those whose vinyl copies have been worn out. (FdW)

Irregular rock, freeform jazz, noises, no wave, un-folk,, children melodies and all kinds of out of tune stuff.

If you like "How Do We Prevent the Advance of the Desert ? " CD, you may also like:

Bandcamp Daily  your guide to the world of Bandcamp

sndtrak stops by with an Album of the Day Feature of his most recent release, FLIPS V1: Triple Lindy